‘There the poor dare plead’

My career as a university student of English Literature was, to borrow a phrase, nasty, brutish and short. One of its many lowlights, most of which have slipped from memory, was a week or so of slogging through The Vision of Piers Plowman, a late 14th-century poem of 14000-odd lines attributed to one otherwise obscure William Langland. Though elegant enough in a lesser-Chaucerian way – lesser as it lacks Chaucer’s wit and birdsong and colour – it is, like other long medieval allegories where characters are named as abstract nouns (The Romaunt of the Rose, The Pilgrim’s Progress), a mostly tedious affair. 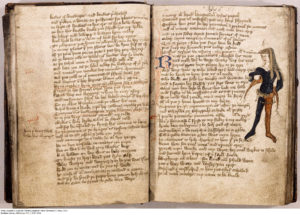 But there’s a line from it – the one I have used as the title here – that comes much to mind this week. Those living the latter half of that century must have thought the times not just tumultuous but apocalyptic: three epidemics of the Black Death; the great frosts and Biblical storms that destroyed harvests and starved the already miserable serfs; the rising anger across a land whose feudal lords had impoverished its people by lavishing fortunes on needless wars; the Peasant Rebellion (featuring my supposable ancestor John Ball, ‘the mad priest of Kent’) that burnt the Savoy Palace and briefly captured London; Wycliffe not being struck by thunderbolts for attacking the power of the clergy and translating the Gospels into the unholy language of the villeins; and, by way of culmination, the coup that removed and probably murdered an out-of-touch foreign-born (but nonetheless, to the medieval mind, divinely-appointed) king in favour of a native and more populist/nationalist successor – who then spent his entire reign obsessed with foiling assassination plots because the losing side, the side that hadn’t gone for the propaganda harking back to the glory days of military success two generations before, didn’t want to accept that they’d lost and had better just get over it.

Some of this may sound vaguely familiar. Then too, it was a bad time to be poor: on the non-VIP menu, the only pie was the one in the sky. And so to the Vision, where Pacience tells her listener he has no cause to envy what seem to be the lucky ones:

Though men rede of richesse

Right to the worldes ende,

I wiste never renk that riche was,

Whan he drogh to his deeth day,

Rather than out of dette.

If your Middle English happens to be a bit rusty, the gist is that she never knew a rich man look forward to meeting his Maker, fearing a bigger bill than he could pay. There, at the rekenyng, the little man’s moment will finally come:

And preve by pure reson,

To have allowance of his lord,

By the lawe he it cleymeth;

Of rightful jugge he asketh…

But every now and again the poore get tired of waiting. Why and to whom should they plead where no rightful jugge can be found? And so you arrive at 1789, 1917, or wherever you please, and, depending on your sympathies, either recoil at the thought of those barbarous times or lapse into romantic daydream. Both courses are dangerously naive.

It has been said that every revolution is impossible till it happens, after which it was always inevitable. World War I came about in part because people thought themselves to have advanced beyond such savagery. In the England of the Black Death, regicide was unimaginable – akin to a kind of national satanism – while just around the corner. The Berlin Wall stood as firm as ever one day before it fell, and that is in living memory. So is 9/11, which, out of the blue, instantly divided history into before and after. Those barbarous times are now.

I have ‘followed’ various anarchist pages on social media. By and large, I like anarchists: they have a healthy scepticism and a sense of humour. I give them my full blessing to seize the means of production and punch all the Nazis they please. But some, especially where they overlap with anti-fascists, have idealised notions of violent insurrection and communism that I’m not in a position to share. Unlike them, I’ve lived – and for a long time now – in a country where it was tried. I’ve seen what it did. There’s no getting away from the fact that it didn’t work. The problem is the people who end up in power. Mao and Pol Pot were medicines far worse than the disease. Even where at least some revolutionaries are true believers, the slightest chance or intrigue afterwards can throw up human detritus like Stalin. However just Wat Tyler’s cause, he was not head-of-state material. Demagogues never are. Look across the Atlantic. And imagine a Britain under, let’s say, Nigel Farage, with a cabinet and new ruling class supplied by UKIP, the EDL, PEGIDA and perhaps the scrapings of a few prisons… Implausible as it sounds, this – patriotism and integrity recognised only in thuggery and ignorance – is very close to what actually happened in Russia (and Germany, come to that, and maybe China too). The Bolsheviks’ murderous ideological stranglehold had much in common, ironically, with the current Islamic State. Luckless millions nevere joye hadde, and no rightful jugge either. (Incidentally, after all the fanfare of the 60th and 70th anniversaries of the World War II victory, I have heard not a peep here about the centenary of 1917…) 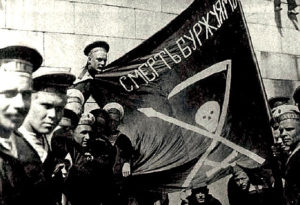 So much for that. The relevance? Well, I’ve been telling people for a while that, though I’m no kind of economist, even I can see that we’ve been following a plan basically intent on the restoration of feudalism. They mostly look half amused and half embarrassed on my behalf, as if I’ve announced that the trees are listening or that I’m the step-sister of Napoleon. But we now have five people as wealthy as the poorer half of the world. Last year it was 60-something, six months ago eight. How long till it’s three, two, one? And we have just, in the richest neighbourhood of the city that still gets mapped as the centre of the world, seen a tower block of poor people incinerated because they were not worth the cost of alarms and sprinklers, or even the extra 5000 pounds – out of 10 million supposedly allocated to its renovation – for non-flammable cladding. UK government policies condemned by the UN as violating the human rights of the sick and disabled are estimated to have caused as many as 30,000 preventable deaths, but that occurred well away from television cameras; the horror of Grenfell Tower, though, feels like a 9/11 moment, an iconic image fixed indelibly on the memory. And there’s no blaming it on terrorists or any other bogeymen. It is political, for sure, but in the way that the Hillsborough disaster was political: just as the latter could not have occurred at Wimbledon or Ascot, the Grenfell inferno would have been impossible in housing for the better off. It will go down in the tragic annals of British class struggle along with the Peterloo massacre and all the rest that schools don’t teach. Aristotle said that revolutions are not about trifles, but come from trifles. This is more than a trifle. 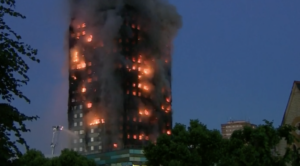 I don’t suggest, of course, that the UK is on the brink of armed insurrection. But the now visible combination of righteous anger and instant solidarity across social, ethnic, religious and even most political boundaries is a first in my lifetime. The corporate media’s power as an instrument of control, ever stronger over the last few decades and apparently invincible only last year in the Brexit vote, seems now to have crumbled in a mere few weeks. Their failure to shore up an execrable unelected prime minister devoid alike of humanity or intelligence was already a milestone; the sight of a man walking into a Tesco supermarket in broad daylight, seizing the entire stock of Sun newspapers, tearing them up in the doorway and binning the remains to the cheers and applause of passers-by was one I never quite expected to see. That, though a trifle on the face of it, was an act of revolution. While working as an examiner in spoken language tests, I regularly have to ask teenagers and students about their favourite TV programmes, and more often than not now the answer comes back: “I don’t watch television.” This too, whether or not they mean it as such, is an act of revolution. You can keep out economics from a national curriculum to minimise financial literacy; you can keep out philosophy if the last thing you need is a populace capable of critical thought or of reflection on truth or goodness or power or justice; you can expunge the parts of history that don’t fit your narrative; but ultimately, if people won’t read what you let them read and watch what you let them watch, who’s to assume they’ll think and vote as you require? 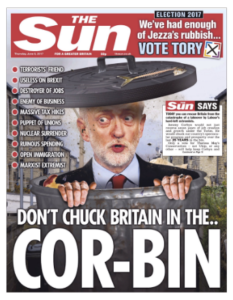 Whether a spark of anything non-worldly ever flickers in the head of a Trump or a Rupert Murdoch or a Theresa May is not for us to know, but you would have to imagine that a place where the most a poor man will dare is to plead – and probably think long and hard before that – must be something like their idea of heaven. But plede here is not a synonym of beg: it is a court metaphor, with justice claimed as a right by pure reson and by the lawe. And this lawe is of a kind that no government can repeal.

John F. Kennedy said that those who make peaceful revolution impossible make violent revolution inevitable. Options presently exist for the first way, on both sides of the Atlantic, but Corbyn and Sanders are 68 and 75 with no obvious successors. A people’s movement seems to be making ground in Spain, and there was that French socialist but his name slips my mind and he seems to have disappeared… Anyway, at the time of writing, we have a British prime minister who, by her own admission, can not interact with the British public but must be protected from them by walls of security and hurried under guard into waiting black vehicles like a captured terrorist or a notorious child murderer. It’s no wonder that she wants to make the country ‘a world leader in internet regulation’. 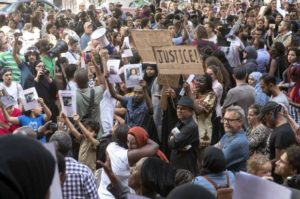 Anyone thinking the current order can continue indefinitely has no grasp of history. Change or upheaval will come one way or another; the hope is to make it positive and peaceful. And for that, the clock may already be ticking.