Does a missed boat ever come back?

Nearly two years ago I wrote this post about a comic novel – a satire on nationalism, warmongering and public gullibility – on which I seemed to have wasted about eighteen months’ work. Not that I doubted the quality of the thing, you understand. The snag was, if you’re a TL:DR type or paranoid about clicking links, an open-and-shut case of plagiarism by the Fates. It’s fine for life to imitate art if you got the art out there in time, but if you didn’t…

I thought that with the basic storyline I’d given myself some breathing room. An ageing and benignly eccentric children’s cartoonist instantly becomes a national hate figure after a broad-daylight killing by a perpetrator dressed as one of his characters, an aristocratic cucumber. The victim turns out to be a North Korean dissident and enemy of sinister dictator Boh Gi Mon, with whom the said cartoonist is, by the reasoning of the media and therefore the public mind, clearly in league.

It seems long ago already that Jeremy Corbyn was new to prominence, does it not? Was the world slightly different pre-Brexit and pre-Trump? It wasn’t too different for me to have as my inciting plot incident a false-flag attack on a politically charged figure for the purpose of besmirching a foreign power and drumming up support for the status quo and a possible war. But it apparently was different enough for an expert from inside the publishing business to tell me, twelve months before the Skripals and fifteen before Babchenko, that this was not credible and the ‘reaction to the [killing] is weirdly extreme’. That wasn’t all she objected to. ‘Calling the left-wing enemies Bogeys is a bit too silly for me – there is a children’s TV programme in which the presenters shout that in libraries for a dare.’ Right, cheers. When for the 1587th time she sees anyone dissenting from received opinion being shouted down as a Putinist troll, she may make a connection. Or she may not. Trolls are not the slightest bit silly.

The witch hunt commences, complete with effigy burnings in the towns and patrols by nationalist thugs in green wellies through the countryside, all with the aim of saving Britain from the Bogey peril and from foreign influences in general.

This is from March 18th this year:

Had someone told my grandfathers, when they were heading off to war (I happen to be writing this on the anniversary of D-Day), that in 2018 we’d have Nazis rallying in Hyde Park in a UK where their grandson’s family were not permitted to live (the price of marriage to a foreigner), I wonder if they could have believed they’d be coming home alive and decorated and victorious. I wonder if they’d have bothered. A man who wants to abolish an entire religion is somehow being held up as an icon of and martyr for free speech. 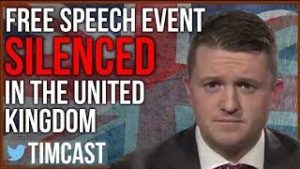 Before I start sounding told-you-so smug, though, there is another angle too, from which the joke is on me:

It wasn’t always from strangers. Against the same background, I also heard the rubber-stamped slogans and sentiments drop from the unwitting lips of acquaintances I had previously considered intelligent and discriminating. Those et tu moments are silently tragic. It’s hard at such times not to imagine the average Jo(achim) Publik of 1930’s Germany and ponder.

Yes, it was Russia that inspired all this. But the above now describes Britain and America every bit as well as Russia. If mass cretinism sounds like an overstatement or conspiracy-theorist paranoia, bear with me and revisit what most of the western public has swallowed regarding the Skripal case. This, I repeat for emphasis, is the official version.

All clear? Now shut up and watch Love Island, you unwashed pleb morons, and go back to sleep.

That, I repeat once more, is the official version as presented by the UK Foreign Office. I freely admit that I struggle to compete. But I tried.