‘We the People – no, not you…’ – a Remainer tires of Remoaners

A little over two years ago, I wrote a post in the aftermath of the Brexit vote. Emotions ran high on all sides, and I had a personal stake: already locked out of Britain by Theresa May’s hostile environment, I was now to be locked out of Europe too. Even without that, it was a bitter pill to swallow for any supporter of clean food and rivers, of workers’ rights, of peace in Ireland, and for anyone who had seen the obvious and now famous lies for what they were.

Every indication now is that the outcome will be worse than any of the original worst-case scenarios. A conspiracy theorist might even suspect that, for Britain, the debacle that has been the so-called negotiations was never meant to succeed and that the transition to a deregulated tax haven was foreordained.

But wait! All is not lost! The forces of righteousness are on the march! (Hey DJ, Ode to Joy, quick!) Here comes Alastair Blairbombs Campbell, having waited over a decade for a chance to rehabilitate his reputation and be known as something other than the salesman of the Iraq war! Here comes David Lammy, seeing an instant ready-to-be-cultivated base for a future bid as party leader or prime minister! Here come Gina ‘Fascism-of-the-Left’ Miller and Chuka ‘I’m the British Obama and I don’t associate with trash’ Umunna, those self-crowned idols of centrism, and nice posh auntie Anna Soubry with her ‘101 Hand-Wringing Speeches About Shit I Never Stop Voting For’! How could any Leaver looking on from a run-down council estate fail to be persuaded by heroes like these? 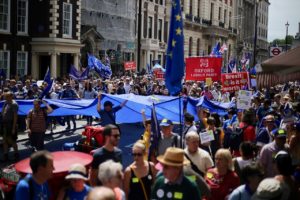 It was around the time of the Brexit vote that the big cheeses of the US Democrats decided that the presidency was theirs to bestow as a reward for services rendered. It mattered not how repulsive a human being they chose – because come on, who could actually lose to a cartoon fascist like Trump? And as His Orangeness was duly and bigly inaugurated before the Gigantickest Crowd Ever In The Universe (certified alternative fact), did any realisation or humility descend on the vanquished? Ah no, they say, because, you see, we didn’t really lose – Hillary won the popular vote. Did millions of people vote for Deplorable Don because we just left them to get poorer and poorer and poorer and then called them names when they got angry? No, not at all. It was the Russians. The Russians did it all. How? With ads on Facebook.  Oh, and Trump is a Russian asset.  He’s even met real Russians – what more proof do you need?

Is there no point at all at which these people accept the smallest degree of collective responsibility? It’s easy to ask with regard to America, but how about closer to home? No, it’s because all Leave voters are racist. Yes, every last one. Ah no, wait – it was the Russians! They did this too! Of course – it all fits! The Russians! 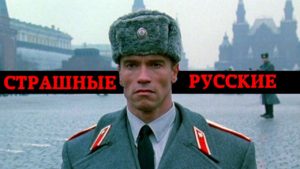 Some said at the time that the Remain/Leave divide ran along lines of wealth. Based on what I saw of friends, acquaintance and relatives, it was rather one of education. I know only one educated person (neither wealthy nor poor) who voted Leave, and only two uneducated ones (ditto) who voted Remain. The former I rather suspect of wanting to be ‘down’ with the working classes, and the latter had foreigners in the family. So how was it that the educated half of the country failed so utterly and abysmally to persuade the uneducated half that pushing the economy off a cliff might not be in their best interests? Yes, there was a forty-year campaign of increasingly blatant indoctrination by certain tabloids. But one would have to assume these Brexiteers would not have ritually sacrificed their own children to the spurious gods of sovereignty in a literal Abraham-and-Isaac sense, however many times the papers told them to. So is the supposed authority of the printed word the only reason they trusted the proven liars of the Mail, S*n etc. more than they trusted us?

In hindsight, o fellow Remainers, taking the piss out of them for not being able to punctuate or spell was perhaps not the best way to win trust and influence. Dostoevsky once said that an Englishman would go a thousand miles to civilise a savage in the jungles of Africa but wouldn’t worry his head about the million savages in London. Putting aside the colonial Victorian language and worldview, his point stands. The caps-lock Brexit evangelists who can spell no English words except ‘a’, ‘the’ and their own names are the product of a school system that has been deemed perfectly good enough for the likes of them. Their ignorance, like their poverty, has been approved all the time it has not damaged those more comfortably off, especially while it perpetuates class divides and guarantees the supply of underpaid labour until robots are ready to take over.

Or were they actuated not just by the gutter press but by their own lived experience? Is it the fault of the Russians (any more than of the EU) that one of Europe’s richest countries contains many of its poorest areas? Where lies the collective responsibility for that? The British Medical Journal estimates that Tory austerity policies have now killed more Britons than the Luftwaffe, terrorism and every armed conflict since World War II all combined. The ongoing poverty death count in the world’s #6 economy is the equivalent of a 9/11 every month. For years the ballot box offered little alternative, and then, in 2017 when it finally did, a huge chunk of the electorate voted to keep the party of austerity (having already reelected them in 2015) while another swathe voted for the LibDem enablers of austerity on the promise of a second referendum, now branded the People’s Vote. 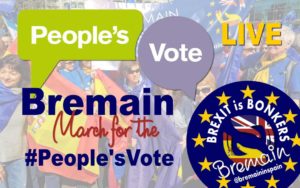 (As an aside, these People with a capital P seem happily unconcerned at the precedent of setting aside a democratic vote because it did not produce the ‘correct’ result. Should Remain win 52/48, they will presumably, having spent two years saying that this was not a sufficient majority to justify a major change of national direction, decide that in fact it is. Should irregularities then appear in the finances of the Remain campaign, will the victors demand another rerun? Should Leave win 51/49, will it prove again to be the dastardly Russians?)

And that might lead a cynical observer to the unpleasant conclusion that, aside from their pet project of stopping what few outlying pebbles of the avalanche of disaster might just slightly graze them, they basically don’t give a shit. I’m not a betting man but I’d lay a heavy wager that should these people – sorry, People – get their way, the vast majority of them will instantly go back to sleep (or backpacking around the Schengen zone) and blithely consign the poorest third of the population back to the food banks and the zero hour contracts, to more of the same misery and injustice and suffering that brought us here to begin with.

So you can stick your march, and you can stick your People(*terms and conditions apply)’s Vote, because if you truly cared beyond your own self-interest, you would be expending this time and effort on the removal of the so-called government that has wrought all this. Yes, I do realise that Brexit will be somewhere between bad and ruinous. But that’s partly because of the people currently in charge of it. So how about seeing the bigger picture here and trying to help and include people whose need is greater than yours?

The loss of European citizenship will send a bulldozer through certain of my future plans and will adversely affect my children’s social and professional opportunities. But I do not, thank God, have immediate worries about buying dinner tonight or paying the heating bill this winter. In other words, I am not the first priority. And the total self-absorption of many tunnel-vision Remainers, from the careerist politicians down to the disenfranchised hipsters, is barely less ugly than the xenophobia and bigotry that underpinned much of the original Leave campaign. As every parent of multiple children has had cause at some time to say: you two are as bad as each other.