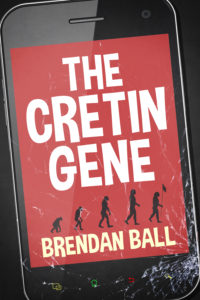 Al Horowitz, ageing cartoonist and self-styled ninja, is catapulted from peaceful dotage to national notoriety when a dissident’s assassin disguises himself as a benign Horowitz vegetable character. Reviled in the press and hunted as a murderous agent of North Korean dictator Boh Gi Mon, Horowitz is soon on the run with his nephew ‘The Kid’, a reclusive arch-nerd geneticist, battling a plot to cretinise the populace through customised junk food additives and media programming. As the zombified masses rise in effigy-burning rage against Horowitz and his supposed fifth-columnist cadre, young lab colleague ‘Technicia’ joins the fight to save intelligent life in the UK while also juggling two male egos and her own secret of the heart.

If Jordan Henderson were Brazilian with expensive hair, he'd be linked to Real/Barca every other week. #LIVMUN

@JurgenPressed A depressing number of times recently I've seen overt racists/Tories/nationalists with #YNWA in their profile. Clearly never given the slightest thought to what it means. No one I was following, at least. Wonder what they'd say about Herr Klopp if he didn't happen to be #LFC.

They don't need rewriting, just unbiased reading. Christ and his disciples rejected not just private property but personal property. You don't get any harder left than that. 'Socialist values' would move them to the right, if anything. Merry #Christmas to all. twitter.com/joshuawongcf/s…

We're going to lose the #NHS because David Cameron fucked a pig. #GeneralElection2019

@davidfrum When's the honest reckoning about Hiroshima and Nagasaki?